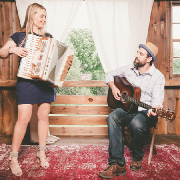 Based in Madison, WI, husband and wife duo Joan Herzing and Gary Fletcher first began creating music together in early 2014, when the pair were involved with various lineups, garnering experience in studios and on stage, and becoming players in the regional Upper-Midwest music scene. Until then, Joan had been (and still is) active in the long-established powerhouse band, the Blue Olives, while Gary was chipping away (and still is) at his songwriting and technical prowess. Expect to hear a mix of original music with a healthy dose of tasteful covers, an array of Joan's instrumentation (saxophone, keys, cajon, accordion, etc) and soaring vocals, and Gar contributing on