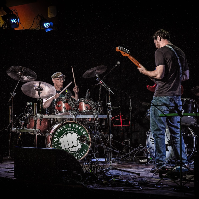 MoodTrain is a groove-oriented, melodic funk-rock power duo comprised of Verge Manyen & Travis Ziegler. We play entirely improvised sets of instrumental music that stretch beyond definition or replication. Travis and Verge have been playing together for eight years, five of those as MoodTrain. You can find our first album "Great Lakes Airlines Volume I" on all the major streaming services. We will be recording a new record in the coming months with a view to releasing this summer. Travis has also played with Late Harvest, while Verge also currently plays percussion for Motherhive. Verge was a founding member of Chicago funk rockers Quaker Youth Ensemble, who were nominated alongside Smashing Pumpkins as Best Local Band in the 1991 Chicago Musician Awards.