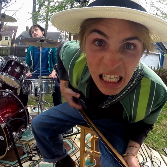 Vegan Steakhouse is, at its core, a trio of three friends having a good time. Their style a blend of pop, funk, and indie rock, they formed in 2017 with a single Green Day cover and soon began material of their own. Over the past four years, they have been slowly working their way through writing their debut album, “Steer in the Headlights”, which is planned to release sometime in 2021.