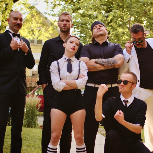 Something To Do is a long-running ska rock band from Milwaukee, WI. S2D (not STD) has played thousands of shows, broke millions of hearts and generated almost one hundred dollars in U.S. currency. They’ve been described as “exuberant and irresistible” (Milwaukee Journal Sentinel), “…anthemic, brassy & brash” (Milwaukee Record), “uproariously fun” (Milwaukee Magazine), “kick-ass” (dyingscene.com), “chunky” (ToneMadison) and “kind of jerks but a really good band” (someone on reddit.com). S2D’s most recent album was released at the end of 2020 and is titled “Give Me Attention” – BrooklynVegan.com said it is an “extra good album. It sounds fresh and energetic”, SkaPunkDaily included multiple tracks from it on their “best of 2020” playlist and BreakingAndEntering.net said “These tunes remind us one after one that we’ll be having wicked, beer-soaked parties once the pandemic is over”. In 2021, Something To Do was named “Best World/Reggae/Ska” band by the Wisconsin Area Music Industry (WAMI