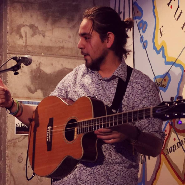 Samson Vi (pronounced Samson six) is a singer songwriter from Colombia, based out of Madison Wisconsin. His EP "stories of love" under the former alias Nico Rocer gain local buzz as people were delighted by the rawness of the vocals, combined with the acoustic guitar, latin american influenced pop rhythms, and deep lyrics of sadness in every love story in it, earned him an nomination for the Madison Area Music Awards in 2020 for the category of best pop/Rn’B album. At the end of 2020, Nico decided to open his project to a wide variety of genres without losing his escene in the deep feels and lyrics driven music, renaming his music project “Samson Vi”, landing him some big collaborations in the midwest EDM music scene, with singles alone (remix w/ Max1millions), and Maybe (ft. BKWDS, Lil Moody, and Max1millions once again). These singles went onto achieve 70’000+ streams in spotify and open the door for Samson to reach out to a wider audience with his music in this 2021.