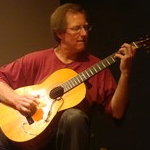 Jeff has performed with bands and done solo guitar concerts for more than 30 years, and taught students for more than 20 years. He plays and teaches most styles of music, specializing in jazz, progressive rock, classical and fingerstyle solo guitar. He also teaches electric bass. He has released three CDs, including the score to a musical play, a jazz/rock mixture of covers and originals, and most recently, “Jeff Larsen plays Emerson Lake and Palmer,” his solo fingerstyle arrangements of ELPs best. He won a 2009 MAMA (Madison Area Music Award) for best classical piece of the year. Having written more than 100 pieces of music, he is able to help guitarists become composers as well as players. He currently has a biweekly gig at the Java Cat, playing solo fingerstyle guitar arrangements of the Beatles, ABBA, Who, ELP and a mix of originals.