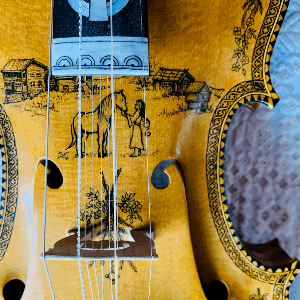 Lucy Jacobus, already an accomplished 13 year old traditional fiddler with the Starr Grass Band, was inspired to play the Norwegian Hardanger fiddle after being entranced by the Lord of the Rings soundtrack. After she discovered the unique sound came from the Hardanger fiddle, she was determined to play it. Hardanger fiddles originated in the 1600s and are richly ornamented with intricate carving, inlaid fittings, and black line drawing. An ethereal resonance is created by the sympathetic understrings. Lucy was granted an instrument on loan from the Hardanger Fiddle Association of America and began studies with Karen Rebholz, who also builds and repairs Hardanger fiddles. Lucy and Karen will perform traditional Norwegian tunes guaranteed to conjure up visions of the creatures that inhabit the Norwegian countryside!