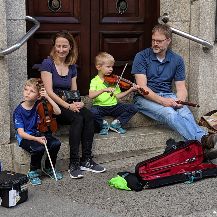 Based in Madison, Wisconsin, with musical influences from Chicago and Ireland, Tit For Tat delights audiences with the melodies and rhythms native to Irish traditional music, performed on concertina, fiddle, flute, accordion, and harp (venue-permitting). The group features two of the Midwest's most talented up-and-coming Irish fiddle players, Faolan & Ossian Rogers. At ages 10 and 8, Faolan and Ossian are already veteran performers, sure to capture the attention of audience members young and old alike. The group performs music within the Irish tradition, including jigs, reels, hornpipes, and polkas, and builds on the traditional repertoire of Ireland with award-winning original compositions.