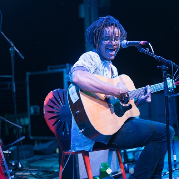 Bear In the Forest

The songs of Bear In The Forest (BITF) howl with spiritualism. It is built around folk music in the oldest, barest sense: joy and pain and a guitar coming together to produce sounds that resonate with ancestral memory. The BITF project is a slow burn. Bear, a.k.a. Alberto Kanost, has been writing and preforming songs under this moniker for about a decade, beginning when he was 15. Now at 24, he has had multiple iterations of bands and worked with two different producers to release two projects and a handful of singles. His collaborators and producers come and go, but it seems to always come back to just Bear and his guitar. Bear draws a lot of inspiration from the Indie-folk bloom of the 2000s/2010s; with acts like Mumford and Sons, Laura Marling, Bon Iver, Ben Howard, and Tallest Man On Earth, being huge influences for his sound and songwriting. After Bear's recent graduation from UW-Madison in 2020, BITF released a second project available on most streaming platforms.